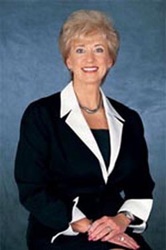 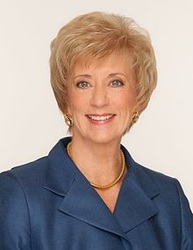 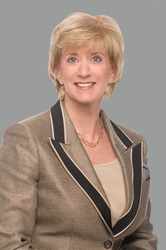 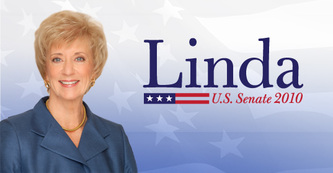 Linda McMahon is the CEO of World Wrestling Entertainment..
October 11, 2001 - Smackdown!: Linda McMahon made an appearance to reappoint her pal Mick Foley as WWF Commissioner.
March 18, 2002 - RAW: Linda McMahon officially announced the brand extension, splitting the roster into two brands..
April 28, 2003 - RAW: Linda McMahon showed up and put Eric Bischoff in his place, naming his new co-GM, Steve Austin!!!
July 21, 2003 - RAW: Linda McMahon gave Steve Austin & Eric Bischoff the night off, and she got tombstoned by Kane!!
August 18, 2003 - RAW: Linda McMahon issued a live statement but was interrupted when Eric Bischoff shows up at her house!
October 9, 2003 - Smackdown!: The McMahons (Linda, then Steph, then Vince)  opened the show and Vince hit his daughter!!
October 19, 2003 - No Mercy: Vince McMahon beat Stephanie McMahon in an "I Quit" match when Linda threw in the towel..
February 2004: Linda McMahon became a grandmother as Marissa & Shane McMahon welcome a baby boy into the world!
October 3, 2005 - WWE Homecoming: The evil Mr. McMahon returned to gloated about his feud with Stone Cold Steve Austin..
~~~Suddenly Stone Cold's music hit and out came Steve Austin, who showed old footage of the times he humiliated McMahon..
~~~Steve Austin remember the time he held Vince hostage at gunpoint, and also the legendary corporate beer bath!
~~~Vince McMahon, who was clearly uncomfortable, offered a truce with Steve Austin, and asked if they could start over..
~~~Vince tried to leave, but Austin pulled him back and gave him the middle finger before giving him a Stone Cold Stunner!
~~~Shane McMahon came out to confront Steve Austin, but before he could speak he got a Stone Cold Stunner of his own!
~~~Stephanie McMahon came out next and after several minutes of banter, she got a Stone Cold Stunner of her own!
~~~Linda McMahon came out to try to be the voice of reason, asking for an apology, but she got a Stunner too!
October 10, 2005 - RAW: Vince, Linda & Stephanie McMahon collectively fired Jim Ross and Linda kicked him between the legs!
June 11, 2007--RAW: The Mr. McMahon "character" was tragically killed when his private limousine exploded into a ball of flames..
June 18, 2007 - RAW: Stephanie McMahon appeared and cried about her father's "presumed" demise in the middle of the ring..
~~~Stephanie (very bad acting) promised that there will be "Vengeance" when her family finds out who did this to her father..
August 2007: With the "explosion" angle dropped, Vince McMahon was informed that he had sired an "illegitimate child"...
September 3, 2007--RAW: Vince McMahon was confronted by Linda, Stephanie, & Shane McMahon - who asked Vince to "change"..
~~~Mr. Kennedy showed up claiming to be Mr. McMahon's "bastard child" and convinced Vince to stay the same and not change..
~~~A lawyer representing the mother of Vince's "bastard son" showed up and said Mr. Kennedy was NOT the illegitimate child..
~~~The lawyer announced that Vince's illegitimate son will reveal himself next week and left a clue: "Thing's Are Looking Up....."
September 10, 2007--RAW: Hornswoggle was revealed to be the "illegitimate son" of WWE Chairman Vince McMahon!!!!!!
January 12, 2009: Linda McMahon was appointed by Connecticut Gov. Jodi Rell to the state's board of education.
November 1, 2010--RAW: Vince McMahon appeared in a "Dream Sequence" segment with daughter Stephanie and the voice of Triple H..
~~~~~~The whole thing was a joke making light of Linda McMahon's election campaign and the punchline was Vince was still in a coma..
November 2, 2010: Richard Blumenthal defeated Linda McMahon in the Connecticut senate race by several percentage points..